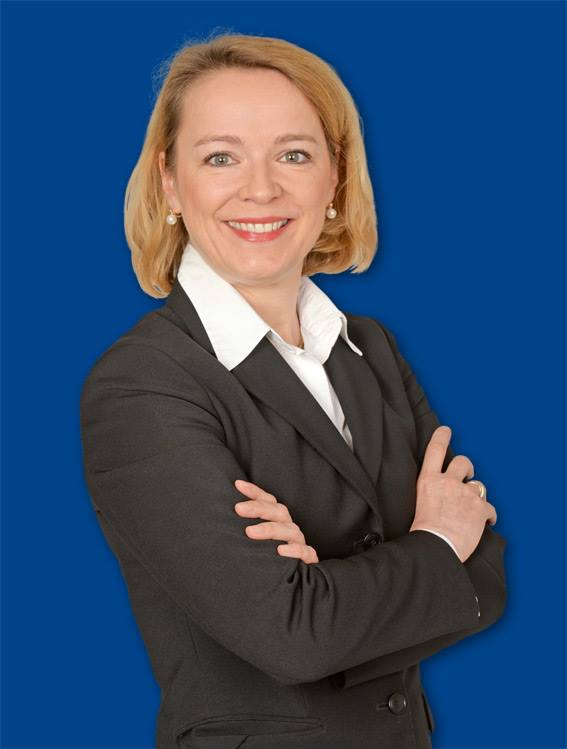 All across the EU, the results of the May 2014 European elections brought substantial gains for Eurosceptic parties in the European parliament. In the coming legislative term, more than 200 of the 751 MEPs of the plenary will be occupied by Eurosceptic politicians.  While the leader of the French right-wing party Front National, Marine Le Pen, did not manage to form a group in the parliament, other Eurosceptic parties succeeded in doing so.

One of them is the European Conservatives and Reformists (ECR) group, which had already been part of the 2009-2014 plenary. It gained 13 more seats compared to the last term and has become the third-largest group in the parliament with 70 MEPs. Partly responsible for the strong performance of the ECR in the elections was the new German conservative party Alternative für Deutschland (AFD), which now provides 8 MEPs for the conservative Eurosceptic party.

Ulrike Trebesius (44) is one of the newly-elected AFD MEPs and will be member of the EP committee on employment and social affairs. Trebesius, who is a studied construction engineer, has represented the AFD as speaker in the German state Schleswig-Holstein and has been candidate for the 2013 Bundestag elections.

In an interview she accorded to “Au café de l’Europe”, Ulrike Trebesius talks about her ambitions for the coming term, the constituency of the new plenary, her conclusions from the May 2014 elections and makes a plead for an end of the Euro and more direct-democratic decision-making in the EU.

You have been elected for the first time as MEP into the European Parliament. What are your goals for the coming five years?

We want to bring to the many Germans who are disgruntled by the EU to attention how much EU legislation influences their daily lives. Often they say that Brussels and Strasbourg are so far away and that the EU has nothing to do with them, but what is true is that more and more issues are being regulated by Brussels. Our goal is to recommit the EU to the principle of subsidiarity, meaning that many issues should be regulated in the member states, which can do this in a more effective way.

The constituency of the plenary has quite changed compared to the previous term. What do you await from this new parliament?

I followed the re-election of Martin Schulz as president of the parliament as well as the election of Jean-Claude Juncker as next president of the commission. These are two totally wrong signals that are being sent towards EU citizens. Technocrats are being put in charge again who are responsible for the dissatisfaction of citizens with the EU. I think both these persons are reactionary, and they represent the over-regulation by the EU. Most people see these elections as a step into the wrong direction.

The AFD was accommodated by the ECR, the third-largest faction in the plenary. What do you expect from the cooperation with this group?

There is a program called the Prague program, which connects all the parties in this group. It is a program that many people in the AFD can relate to. It demands for instance more subsidiarity in the EU, that more competencies should be given back to national parliaments and that family is the heart of society. It is really a program that our party can identify itself with.

Eurosceptic parties have gained lot of support by citizens in the past elections. What conclusions did you draw from the elections?

What I realized in the electoral campaign was, as I mentioned already, that many people don’t know how much impact the EU really has on their daily lives. Also national parliaments use the trick to delegate unpopular issues to Brussels which they can’t get through at home. These issues then return through the backdoor to citizens in the member states and are just rubber-stamped by national parliaments, as for instance the Bundestag in Germany. Many people are fed up with regulations that instruct them for instance how long they are allowed to turn on their coffee machines. They also don’t understand the travelling circus from Brussels to Strasbourg, which costs taxpayers millions of Euros each year and harms the environment. They have no sympathy for these things that are being done by a European elite that is totally out of touch with citizens.

To which extent should the competencies of the EU be limited in your opinion?

The EU should handle those issues for which it was created – tackling big issues such as a common infrastructure policy or a common air traffic policy. In my opinion, the EU is far from doing enough in areas like this.

The European parliament is a place where a lot of compromises are being made to adopt legislation. With which parties do you see common ground in the plenary?

I think that we have the closest proximity to the European People’s Party and that we can work together with them in different issues.

Even if the CDU of Chancellor Angela Merkel is part of the EPP?

I think that with our program we are able to convince many people in the CDU, and many others in this party only follow Merkel reluctantly. We have a much higher economic competence than the CDU, and this is why we possess better, more convincing arguments.
If the EPP of course tables proposals that are not contrasting our positions, we would support them in the plenary.

A kaleidoscope of parties is part of the ECR, notably the far-right True Finns and the Danish People’s Party. Are the values of these parties compatible with those of the AFD?

Honestly, I can only assess the True Finns and the Danish People’s Party as how they have been assessed by the German media, and I very well know how the German media assess us. The way the media in Germany depicted us had absolutely nothing to do with the truth. They want to push us into the far-right corner, just because they don’t want to deal with our arguments.

The EU is facing big challenges in the coming years. Where should its priorities lie in the next term?

Definitively the most important issue is youth unemployment – it is dramatic and intolerable how many young people are being lost here on the way. This is one issue where we want to contribute to, as for instance to really find out what the exact causes of youth unemployment are. I think this is an issue where just the member states can act effectively, not the EU just by itself. If the EU decides to help the member states in this regard, we would of course support this.

Despite the rise of Eurosceptic parties, fervent pro-Europeans such as Schulz and Juncker will be leading the EU in the next couple of years…

As I said already before, this is totally the wrong message to citizens because it represents “business as usual” in the EU. They have absolutely not understood what citizens wanted to tell them through their vote. The extremely low turnout is an expression by citizens of a complete detachment with the European elite – they are saying: “Whatever you are doing, we are not interested by it”. A lot of Eurosceptic parties have entered into this parliament, but what I’ve heard from Schulz, from Van Rompuy and from Barroso so far, they just want to continue on the same wrong path. They just want more Europe, but don’t give concrete examples, except for the fact that they want to create a centralized European superstate.

What do you expect from Juncker’s program as next president of the commission?

Nothing. Jean-Claude Juncker is a man whose business model as prime minister in Luxembourg was to maintain its position as a fiscal paradise. A tremendous amount of debt was built up during his leadership as head of the Eurogroup. I have no idea how a man who has been responsible for all of this can be capable of bringing the EU back on track. During the electoral campaign he seemed really tired and idealess. I also found that there were practically no differences between the plans of Juncker and Schulz. It is so typical for the EU that new ideas have no chance of realization. They are so out of touch with the real world of EU citizens.

An important part of the program of the AFD is the withdrawal from the Euro. But many studies suggest that Germany has substantially profited from the Euro. Why should Germany exit the Euro then? It makes no sense from an economic point of view.

There are many studies as well who suggest the contrary of what you have just stated, that say that Germany has not profited at all from the introduction of the Euro. Certainly there are some industries and companies that have profited in Germany, such as Daimler or BMW for instance, but especially citizens have suffered under the Euro. In Germany, the Euro is seen as the “Teuro”, as citizens have the feeling when they go shopping that prices of products have doubled in the past years. Salaries in Germany are stagnating, and in ten years there has been no significant rise of wages. The Euro has led to blatant distortions in Europe, and many problems that we have nowadays in the EU are inextricably linked to it. I think that EU politicians should acknowledge that the currency union has failed and that something else is needed to replace it. Billions of Euros have been used to save banks, the ECB is artificially keeping certain states alive and overall, no citizen, especially not in Greece, has received any help. What happened in Greece is an outrage, and a country has been ruined in the name of “salvation measures” from which only German and French banks profited. All this leads to increased social tensions and misery for citizens. Countries that would need to devalue such as France or Italy don’t have this possibility anymore. It is high time to say goodbye to the Euro.

So you want Germany to return to the Deutsche Mark then instead?

No, we want to give each country the opportunity to leave the Eurozone and to leave the EU, which has not been possible up until now. Then countries such as Greece can get back on track and refurbish their economy.

According to the AFD, citizens are feeling alienated by the EU. What would be your alternative to stop this development – do you want for instance more direct-democratic decisions in the EU?

Yes, we are clearly in favor of an increase of national referenda in the EU, as this is the most direct way of democracy. Politicians such as Germany’s president Joachim Gauck don’t trust in the capability of citizens and think that they are too stupid to make an informed decisions in such referenda, but we think that they are totally wrong. Instead they have failed to explain their politics well, for instance why the EU has to regulate certain issues and why billions of Euros have to be pumped into certain banks.

On which issues should EU citizens vote on?

I think that TTIP would be very suitable for a direct-democratic decision. It is a highly contested issue that would have a great impact on citizens, but not in a positive way as it currently seems, since the agreement would mostly favor large scale industries. Just to be clear: we are absolutely not against free trade, but in this form, with non-transparent negotiations behind closed doors, we are fervently opposing it.