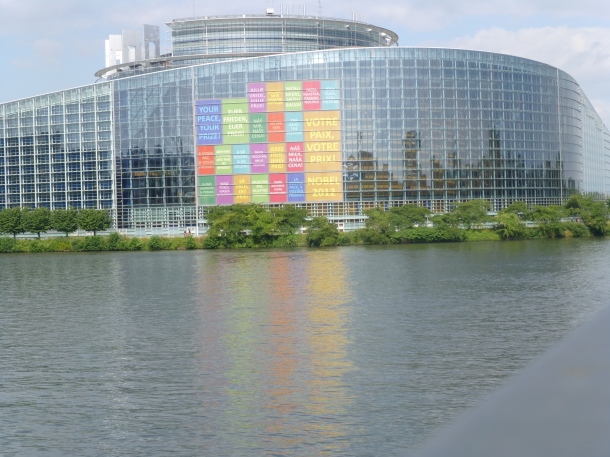 The European Parliament’s seat in Strasbourg (picture by the author)

We are not yet returning to the full newsletter, since the political orientations and developments for the five next years are still being discussed and top EU jobs are still being filled. Nevertheless, here are some key developments that took place during the past 10 days, which saw the European Council meeting and the first new European Parliament’s session take place.

Jean-Claude Juncker (Luxembourg) was nominated as the European Council’s candidate for President of the European Commission. Mr Juncker was the top candidate of the European People’s Party (EPP, centre-right) which came first at the last European elections. Mr Juncker also has the support of the socialist and liberal groups, respectively the second- and fourth-largest groups in the European Parliament (EP), and should therefore be comfortably elected during the next EP plenary session.

Meanwhile, MEPs re-elected Martin Schulz (Germany), the socialist top candidate during the last European elections, as EP President. This is part of a broader deal between Christian-democrats (conservatives), socialists and liberals to share top EU jobs.

Discover in this EP infographics who’s who in the new EP.

The key topics that Matteo Renzi, the Italian PM, wants to address during the upcoming six months are the shift towards a more pro-growth economic policy, bringing Europe closer to the citizens and the EU foreign policy.

Strengthened by the excellent results of his party (the Partito Democratico) in Italy at the last European elections, Mr Renzi has become one of the European social-democratic leaders and has delivered a call for less austerity and more growth-stimulating measures. He did not question the need of sound public finances, but he criticised the fact that some austerity measures implemented during the past years dragged growth down, making it even more difficult for some Member States to reduce their deficit and debt. He restated the importance of the Euro, deriding the “many Cassandras were predicting the implosion of the euro” in the past years and signalled that, now that some stability has been recovered, “we are asking for growth to be a fundamental element of European policy.” Mr Renzi furthermore believed that “now we have the conditions to make Europe able to generate the jobs that our young people need.”

Mr Renzi also spent a big chunk of his speech talking about Europe needing to regain the trust of the citizens. In his words, “if Europe was to take a selfie today, it would be a tired, resigned image”. The Italian PM highlighted the fundamentals of Europe: not only economic, but also cultural ones. In his opinion, “the true challenge of Europe is to find again its soul, its deep identity, and not only to unify different bureaucracies.”

A video of Matteo Renzi’s speech in the EP plenary is available here.