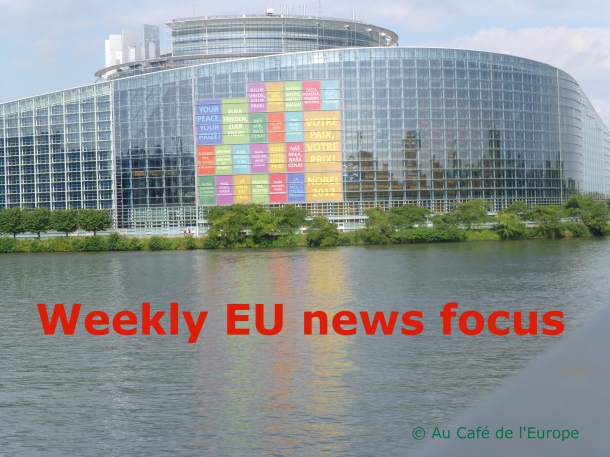 In this week’s edition, the last week of significant institutional activity before the European elections in about a month, you will particularly read about how the EU institutions act to protect workers’ rights and the environment, enhance product safety, make lobbying more transparent, and more…

Enforcing the rights of posted workers

The new draft legislation on posted workers adopted during the plenary session should make it easier to “distinguish genuine posting from attempts to circumvent the law” thanks to a non-exhaustive list of criteria. The final version of the text should improve the right of posted workers and allow Member States to carry out more checks to fight abuse, e.g., “false self-employment and letter-box companies.” Member States may introduce rules on joint and several liability of the main contractor and the direct subcontractor (this rule will be mandatory in the building sector). Finally, information about the posting of workers should become more transparent and more easily available, both to workers and companies. Let us remember that there are over 1 million posted workers in the EU, and that big countries such as France and Germany are among those posting most workers abroad.

MEPs voted on Tuesday to make “made-in” labelling mandatory for non-food products in a bid to strengthen consumer protection. This move would facilitate market surveillance, by enhancing the traceability of products. The supply chain would, thus, become more transparent than under the current system of voluntary labelling which does not always allow the identification of the manufacturer. Firms selling non-compliant products would face tougher, more dissuasive sanctions proportionate to the nature of the infringement. Producers in the EU would choose between “made in EU” or made in their country of origin. For complex products, the country of origin would be the one where “the last substantial, economically justified processing” took place, “resulting in a ‘new product’ or representing ‘an important stage of manufacture’.”

Additional suggestions: For a full and short overview of what the MEPs discussed during the plenary, see this summary by the EP. Have also a look at this summary on the functioning of and the improvements brought by the banking union.

If you want to read more about the European Parliament’s activity each week, click here.

Lobbies in Brussels often have a bad image. That is why the Commission and the EP established years ago a transparency register which currently contains around 6,500 names of organisations (the Commission estimates that “75% of all relevant business-related entities and around 60% of NGOs operating in Brussels have registered”). The register is voluntary, because the Commission and the EP do not want to exclude any stakeholder from the dialogue, but the new agreement on the transparency register will provide increased incentives for lobbyists to register. The register’s sections will be clarified, the monitoring and quality of the data will be improved, and the code of conduct will be strengthened. Better disclosure regarding financial information and the scope of activities will be required. The Council (i.e., the Member States) do not participate in the inter-institutional agreement on the transparency register!

If you want to know more about the Commission’s action, click here.

The financial programmes in the area of home affairs have been simplified for the coming years, as two funds will replace the six previous ones: the Asylum, Migration and Integration Fund (AMIF), which will provide more than €3 billion for actions aimed at managing immigration flows, developing the Common European Asylum Policy and favouring solidarity between Member States, and the Internal Security Fund (ISF), which will make €2.76 billion available for border issues (border management, a common visa policy, tackling illegal immigration, and more), and €1 billion available for police matters (crime prevention, fighting cross-border crime and terrorism, etc.).

We already mentioned in earlier newsletters the reform of the rules on market abuse to strengthen the protection of investors and punish more severely insider trading and market manipulation (including “minimum levels for the maximum term of imprisonment”). The Council has confirmed this week the deal on a new regulation and a new directive.

It also confirmed the deal on the Environmental Impact Assessment (EIA) directive, which makes such assessment compulsory for a number of projects (public and private).

More information about the Council’s work can be found here; for the European Council, click here).

Court of Justice of the European Union

In this case, the problem was that the Polish legislation applied the corporation tax to the Polish dividends received by non-resident investment funds but exempted investment funds with their registered office in Poland. An American investment fund which had invested in Polish companies complained. The ECJ found that this legislation violated free movement of capital (article 63 TFEU and following) because it discouraged foreign investment funds from investing in Poland and Polish investors to put money into foreign investment funds. Then, the Court checked whether there was an overriding reason in the public interest. The ECJ rejected the argument of the need to maintain fiscal supervision because a “regulatory framework of mutual administrative assistance between Poland and the United States of America which permits the exchange of information required for the application of tax legislation” existed. The referring national court had nevertheless to check whether the necessary information could indeed be obtained. Regarding the need to preserve the coherence of the tax system, the ECJ stated that there was no “direct link between the tax advantage concerned and the compensating of that advantage by a particular tax levy, with the direct nature of that link falling to be examined in the light of the objective pursued by the rules in question.” The diminution of tax revenue can never justify a restriction to free movement.  Finally, the need to preserve the balanced allocation of tax power between Member States could not be invoked by Poland, because it had chosen not to tax resident investment funds receiving Polish-sourced dividends.