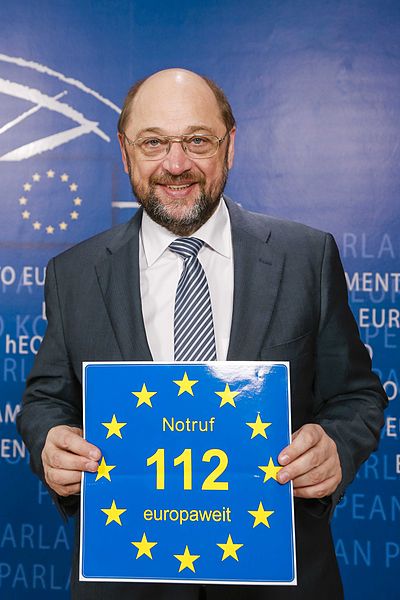 Martin Schulz, EP President and socialist candidate for the Presidency of the European Commission in 2014 (Source: Europedirect, Wikimedia Commons)

Martin Schulz is the PES candidate for President of the European Commission.

What makes of you the best candidate to become the next President of the European Commission?

Because I want to change Europe. Because after ten years of power of the political right, we must finally reorient Europe towards growth, smart growth, which focuses on innovative investments and a responsible control of public expenditure. We cannot let an abyssal debt to our children, but this crisis has shown that austerity does not solve anything and instead worsened the crisis!

Sometimes, people criticise me for not having experience as a minister. I say that I was more than ten years mayor of a town of 40,000 inhabitants in Germany. I know the concerns of the people! I also acted at the heart of the European and intergovernmental policy over the last twenty years as member, group leader and now President of Parliament.

How would you bring citizens and the EU closer again?

There is a problem of trust between citizens and the European Union. Taxpayers are told they must fund bank bailouts, without which the economy would collapse. And what’s happening? These banks are not lending to the real economy, companies cannot hire or fire people and we are unable to help those who are unemployed. So solidarity for banks but not for the people: I understand that people feel distant from the EU!

So I want to restore that confidence. This is a priority.

What is your preferred solution to spur growth and tackle unemployment?

I think that SMEs are the backbone of our economy. While we must obviously defend our great European champions, we must pay special attention to small and medium enterprises. We have an entrepreneurial spirit, creativity, level of training of our people, a market of over 500 million consumers that the world envies us. We must therefore allow SMEs to grow, to invest and to conquer new markets. And this requires the banks to lend to them. With the recent establishment of the banking union, we have ensured that no major crisis could longer infect European banks. Banks must realise that the climate has changed, the risks are behind us and they must again invest in the real economy.

What are the main changes you would like to achieve over the next five years, if you become President of the Commission?

I want to open the doors and windows of the Commission. Starting with the requirement that the President of the Commission shall not be appointed behind closed doors, but according to the choice of citizens. I want the European Commission to become still more transparent and accountable to the European Parliament. Bodies built on no legal basis such as the Troika – which has never had to answer for its actions before a democratic institution – should no longer exist.

I want the Commission to make an effort to make its work more understandable, more accessible. You asked me how we could bring citizens and the EU, I think that by answering their major concerns – jobs, a future perspective for young people – we can make them realize the importance of Europe in their daily lives.

And finally, I want the Commission to reflect the diversity of our population and to fight for the defense of minorities.

My ideal Europe is a Europe that puts the citizen at the center of the European project. It is for him that Europe was created. We forget this too often.

Thank you very much for your participation in our project!